The Trampling Triceratops is a quest with an eponymous boss. Defeating this boss will unlock the Triceratops Quest Pet. The quest scroll can be purchased from the Quest Shop for 4 gems.

The Trampling Triceratops's HP (1200) makes this a long quest and its strength multiplier (2.5) make this a hard quest. Without using Warrior or Mage boss damaging skills, a four-person party can typically finish this quest in about four weeks. The high difficulty means missed Dailies will cause higher amounts of damage to the group; having a Healer in the party is highly recommended.

The snow-capped Stoïkalm Volcanoes are always bustling with hikers and sight-seers. One tourist, @plumilla, calls over a crowd. "Look! I enchanted the ground to glow so that we can play field games on it for our outdoor activity Dailies!" Sure enough, the ground is swirling with glowing red patterns. Even some of the prehistoric pets from the area come over to play.

Suddenly, there's a loud snap—a curious Triceratops has stepped on @plumilla's wand! It's engulfed in a burst of magic energy, and the ground starts shaking and growing hot. The Triceratops' eyes shine red, and it roars and begins to stampede!

"That's not good," calls @McCoyly, pointing in the distance. Each magic-fueled stomp is causing the volcanoes to erupt, and the glowing ground is turning to lava beneath the dinosaur's feet! Quickly, you must hold off the Trampling Triceratops until someone can reverse the spell!

With quick thinking you herd the creature towards the Stoikalm Steppes so @plumilla and @mountartist can reverse the time spell without distraction. Upon your return the pair have fixed the lava but there's still some residual effects. There are triceratops nests and several trees are still toppled. @mountartist passes you some abandoned eggs. "Here take these. They need a home and without you we wouldn't have been able to concentrate to reverse anything at all!"

The eggs obtained from this quest can be used to raise the Triceratops pets and mounts.

Artwork featuring the Trampling Triceratops was created for the official Habitica blog. 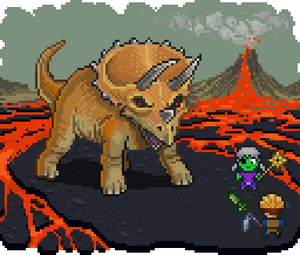 Retrieved from "https://habitica.fandom.com/wiki/The_Trampling_Triceratops?oldid=161279"
Community content is available under CC-BY-SA unless otherwise noted.