The Spirit of Spring

The Spirit of Spring is a quest with a boss called the Ghost Stag. It was released during the 2014 Spring Fling. Defeating this boss will unlock the Deer Quest Pet. The quest scroll can be purchased from the Quest Shop for 4 gems.

The Ghost Stag's HP (1200) makes this a long quest and its strength multiplier (2.5) make this a hard quest. Without using Warrior or Mage boss damaging skills, a four-person party can typically finish this quest in about four weeks. The high difficulty means missed Dailies will cause higher amounts of damage to the group; having a Healer in the party is highly recommended.

Ahh, Spring. The time of year when color once again begins to fill the landscape. Gone are the cold, snowy mounds of winter. Where frost once stood, vibrant plant life takes its place. Luscious green leaves fill in the trees, grass returns to its former vivid hue, a rainbow of flowers rise along the plains, and a white mystical fog covers the land! ... Wait. Mystical fog? "Oh no," @InspectorCaracal says apprehensively, "It would appear that some kind of spirit is the cause of this fog. Oh, and it is charging right at you."

The spirit, seemingly unwounded, lowers its nose to the ground. A calming voice envelops your party. "I apologize for my behavior. I have only just awoken from my slumber, and it would appear my wits have not completely returned to me. Please take these as a token of my apology." A cluster of eggs materialize on the grass before the spirit. Without another word, the spirit runs off into the forest with flowers falling in his wake.

The eggs obtained from this quest can be used to raise the Deer pets and mounts.

Artwork featuring the Ghost Stag was created for the official Habitica blog. 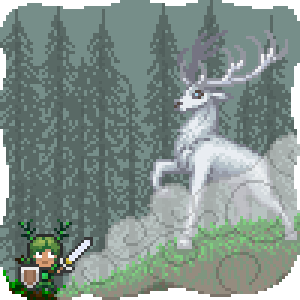