The Snail of Drudgery Sludge

The Snail of Drudgery Sludge is a quest with an eponymous boss. Defeating this boss will unlock the Snail Quest Pet. The quest scroll can be purchased from the Quest Shop for 4 gems.

The Snail of Drudgery Sludge's HP (500) makes this a medium length quest and its strength multiplier (1.5) make this an easy quest. Without using Warrior or Mage boss damaging skills, a four-person party can typically finish this quest in about two weeks.

You're excited to begin questing in the abandoned Dungeons of Drudgery, but as soon as you enter, you feel the ground under your feet start to suck at your boots. You look up to the path ahead and see Habiticans mired in slime. @Overomega yells, "They have too many unimportant tasks and dailies, and they're getting stuck on things that don't matter! Pull them out!"

"You need to find the source of the ooze," @Pffernusse agrees, "or the tasks that they cannot accomplish will drag them down forever!"

Pulling out your weapon, you wade through the gooey mud.... and encounter the fearsome Snail of Drudgery Sludge.

Defeat the Snail of Drudgery Sludge.

You bring your weapon down on the great Snail's shell, cracking it in two, releasing a flood of water. The slime is washed away, and the Habiticans around you rejoice. "Look!" says @Misceo. "There's a small group of snail eggs in the remnants of the muck."

The eggs obtained from this quest can be used to raise the Snail pets and mounts.

Artwork featuring the Snail of Drudgery Sludge was created for the official Habitica blog. 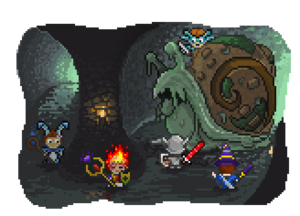 For those with phobias who don't want to see certain quest pets, mounts, and bosses (such as the snails from this quest) during gameplay, there is a Phobia Protection Extension.