The Serpent of Distraction

The Serpent of Distraction is a quest with an eponymous boss. Defeating this boss will unlock the Snake Quest Pet. The quest scroll can be purchased from the Quest Shop for 4 gems.

The Serpent of Distraction's HP (1100) makes this a long quest and its strength multiplier (2.5) make this a hard quest. Without using Warrior or Mage boss damaging skills, a four-person party can typically finish this quest in about four weeks. The high difficulty means missed Dailies will cause higher amounts of damage to the group; having a Healer in the party is highly recommended.

It takes a hardy soul to live in the Sand Dunes of Distraction. The arid desert is hardly a productive place, and the shimmering dunes have led many a traveler astray.

However, something has even the locals spooked. The sands have been shifting and upturning entire villages. Residents claim a monster with an enormous serpentine body lies in wait under the sands, and they have all pooled together a reward for whomever will help them find and stop it. The much-lauded snake charmers @EmeraldOx and @PainterProphet have agreed to help you summon the beast.

Can you stop the Serpent of Distraction?

Defeat the Serpent of Distraction.

With assistance from the charmers, you banish the Serpent of Distraction. Though you were happy to help the inhabitants of the Dunes, you can't help but feel a little sad for your fallen foe.

While you contemplate the sights, @LordDarkly approaches you. "Thank you! It's not much, but I hope this can express our gratitude properly." He hands you some Gold and... some Snake eggs! You will see that majestic animal again after all.

The eggs obtained from this quest can be used to raise the Snake pets and mounts.

Artwork featuring the Serpent of Distraction was created for the official Habitica blog. 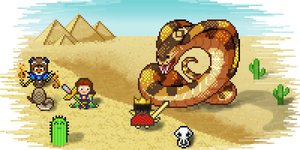 For those with phobias who don't want to see certain quest pets, mounts, and bosses (such as the snakes from this quest) during gameplay, there is a Phobia Protection Extension.