The Jelly Regent is a quest with an eponymous boss. Defeating this boss will unlock the Marshmallow Slime Quest Pet. The quest scroll can be purchased from the Quest Shop for 4 gems.

The Jelly Regent's HP (400) makes this a short quest and its strength multiplier (1.5) make this an easy quest. Without using Warrior or Mage boss damaging skills, a four-person party can typically finish this quest in less than two weeks. This quest is recommended for lower level (less than level 25) characters and smaller parties.

As you work on your tasks, you notice you are moving slower and slower. "It's like walking through molasses," @Leephon grumbles. "No, like walking through jelly!" @starsystemic says. "That slimy Jelly Regent has slathered his stuff all over Habitica. It's gumming up the works. Everybody is slowing down." You look around. The streets are slowly filling with clear, colorful ooze, and Habiticans are struggling to get anything done. As others flee the area, you grab a mop and prepare for battle! You knock and the doors swing inward. From within the gloom you hear a deafening roar, and you draw your weapon.

With a final jab, you trap the Jelly Regent in an over-sized donut, rushed in by @Overomega, @LordDarkly, and @Shaner, the quick-thinking leaders of the pastry club. As everyone is patting you on the back, you feel someone slip something into your pocket. It’s the reward for your sweet success: three Marshmallow Slime eggs.

The eggs obtained from this quest can be used to raise the Marshmallow Slime pets and mounts.

Artwork featuring the Jelly Regent was created for the official Habitica blog. 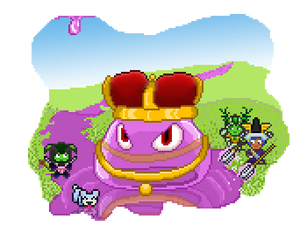