The Guinea Pig Gang is a quest with an eponymous boss. Defeating this boss will unlock the Guinea Pig Quest Pet. The quest scroll can be purchased from the Quest Shop for 4 gems.

The Guinea Pig Gang's HP (400) makes this a short quest and its strength multiplier (1.5) make this an easy quest. Without using Warrior or Mage boss damaging skills, a four-person party can typically finish this quest in less than two weeks. This quest is recommended for lower level (less than level 25) characters and smaller parties.

You're casually strolling through Habit City's famous Market when @Pandah waves you down. "Hey, check these out!" They're holding up a brown and beige egg you don't recognize.

Alexander the Merchant frowns at it. "I don't remember putting that out. I wonder where it came--" A small paw cuts him off.

"Guinea all your gold, merchant!" squeaks a tiny voice brimming with evil.

"Oh no, the egg was a distraction!" @mewrose exclaims. "It's the gritty, greedy Guinea Pig Gang! They never do their Dailies, so they constantly steal gold to buy health potions."

"Robbing the Market?" says @emmavig. "Not on our watch!" Without further prompting, you leap to Alexander's aid.

"We submit!" The Guinea Pig Gang Boss waves his paws at you, fluffy head hanging in shame. From underneath his hat falls a list, and @snazzyorange quickly swipes it for evidence. "Wait a minute," you say. "It's no wonder you've been getting hurt! You've got way too many Dailies. You don't need health potions -- you just need help organizing."

"Really?" squeaks the Guinea Pig Gang Boss. "We've robbed so many people because of this! Please take our eggs as an apology for our crooked ways."

The eggs obtained from this quest can be used to raise the Guinea Pig pets and mounts.

Artwork featuring the Guinea Pig Gang was created for the official Habitica blog. 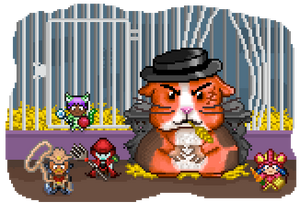 Retrieved from "https://habitica.fandom.com/wiki/The_Guinea_Pig_Gang?oldid=162214"
Community content is available under CC-BY-SA unless otherwise noted.