The Dinosaur Unearthed is a quest with a boss called the Skeletal Tyrannosaur. Defeating this boss will unlock the Tyrannosaur Quest Pet. The quest scroll can be purchased from the Quest Shop for 4 gems.

The Skeletal Tyrannosaur's HP (500) makes this a medium length quest, and its strength multiplier (2) and rage bar (50) make this a medium difficulty(+) quest. Without using Warrior or Mage boss damaging skills, a four-person party can typically finish this quest in about two weeks, but if the rage bar fills (especially repeatedly) it may take considerably longer.

As the ancient dinosaurs from the Stoïkalm Steppes roam through Habit City, a cry of terror emanates from the Grand Museum. @Baconsaur shouts, "The Tyrannosaur skeleton in the museum is stirring! It must have sensed its kin!" The bony beast bares its teeth and clatters towards you. How can you defeat a creature that is already dead? You'll have to strike fast before it heals itself!

The Tyrannosaur's glowing eyes grow dark, and it settles back onto its familiar pedestal. Everyone sighs with relief. "Look!" @Baconsaur says. "Some of the fossilized eggs are shiny and new! Maybe they'll hatch for you."

The eggs obtained from this quest can be used to raise the Tyrannosaur pets and mounts.

Artwork featuring the Skeletal Tyrannosaur was created for the official Habitica blog. 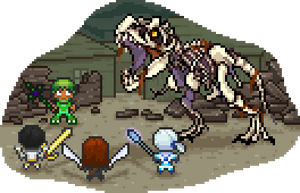 For those with phobias who don't want to see certain quest pets, mounts, and bosses (such as the tyrannosaurs from this quest) during gameplay, there is a Phobia Protection Extension.