The Quest Shop, tended by Ian, is located under the Shops tab of the toolbar (direct link). There, players can buy quests for gold or gems. The shop is divided into five departments: discounted quest bundles, unlockable quests, Masterclasser quest lines, pet quests, and Magic Hatching Potion Quests. At the storefront, four quests are promoted as Featured Quests.

Players can purchase quests with gems or gold. Below is the price list for each quest type. Click on a category for more information.

Unlockable quests will only be unlocked when players check in to Habitica for a certain number of days or reach a specific level.

Players may already own some of these quests when they use the Orb of Rebirth. For these players, quests will not be unlocked again until the player meets the level or check-in requirements listed above. Once those requirements are met, the shop unlocks all quests in the quest line, and the player will no longer need to complete them in order.

The Masterclasser quest lines are a series of 5 separate gold-purchasable quest lines:

Quests cost between 200 and 700 gold, depending on difficulty. The first four Masterclassers quest lines each contain 3 quests that cost a total of 900 gold. The fifth quest line (The Mystery of the Masterclassers) contains 4 quests that total 2200 gold. Together, the first four quests tell a story that builds to the fifth and final quest line. Reaching the very end of the story takes 16 quests.

Within each quest line, the quests must be completed in a particular order. With the exception of The Mystery of the Masterclassers quest line, the first in each line is automatically unlocked in the Quest Shop, with no prerequisites. The first quest is always the least expensive, with further quests in the line becoming both more expensive and more difficult. Completion of a quest will unlock the next in line. Like the unlockable quests, these are numbered in order and will be instantly unlocked when the previous quest is finished.

The Mystery of the Masterclassers quest line is initially completely locked. To unlock the first quest in this line, the player must complete the other four quest lines. These can be completed in any order, but they must all be completed before the player can access The Mystery of the Masterclassers, at which point the shop will unlock Part 1 (Read Between the Lines).

Pet quests cost 4 gems each. They are unlocked in the Quest Shop when a player reaches level 3. Once a player has completed a Pet Quest, the Market will stock eggs for that pet, sold for 3 gems each. Pet quests are regularly added to the shop. When a new pet is introduced, Bailey will make an announcement.

If a "Show More" button appears beneath the pet quests list, that means that some quests are hidden from view. Click that button to reveal the full list. Click "Show Less" to collapse it again.

By default, pets are sorted alphabetically by quest title. Note that the quest title is different from the pet name. For example, the armadillo pet quest is sorted under "T" for "The Indulgent Armadillo", not "A" for "armadillo". (The word "the" is not excluded in the alphabetization process.) Pet quests can also be sorted by the order in which they were released. To do this, go to "Sort By" at the top right corner of the page and choose "Number." To switch back to alphabetical order, choose "A-Z" from the "Sort By" menu.

Quests are occasionally available at a discount as Quest Bundles. Quest bundles enable the user to purchase a set of three quest scrolls for 7 gems, which costs 5 gems less than the three scrolls individually. The three bundled quests are thematically related, such as a bundle for three different kinds of bird pets.

Note that bundles are only available for limited periods of time, usually to the end of the month the offer began in. Some bundles are offered again later. Others have been offered only once (so far).

To find out which bundle is currently offered (if any), look at the "Quest Bundles Listed by Time" tab below (or visit the Quest Shop in Habitica).

When shopping, you can learn a lot about a quest simply by looking at its icon.

Each scroll in the Quest Shop shows a picture that represents its contents. Quest lines are numbered and all display the same picture, which is related to the final boss in the line. Pet quests show a picture of an egg that matches the pet contained inside. The number of scrolls the player currently owns appears in the top right corner within a grey circle. If a scroll displays a lock icon, prerequisites must be met before it can be bought. To see the name and difficulty of a quest, hover over the scroll. Collection quests will also show the number of objects to be collected.

The borders of each scroll are color coded to help when deciding which quest to purchase.

There is a full quest list available. This table shows each quest's name, a picture of the quest scroll, the type of quest (boss or collection), rewards (including gold and experience), boss health points, and boss strength. This list may be helpful if the player is looking for a particular difficulty level or piece of equipment, or if the player simply wants to see a list of rewards without clicking through quests in the shop. Be careful, though; the table contains spoilers.

When the player hovers over a quest, they will see a grey pushpin above its picture. This allows the player to pin a quest to their Wishlist, located in the Rewards column of the Tasks page. Any quest, including locked ones, can be pinned, though locked quests cannot be accessed. Clicking the pushpin will cause a purple circle to appear around it. This marks it as a Wishlist item that will now appear in the Rewards column. Click the pushpin again to unpin the quest.

To see full information about the quest (picture, name, description, difficulty, rewards, and cost), click the quest. Note that the quest will not be purchased simply by clicking on it.

When clicking on a quest, a purchase window will appear with more information about the quest and the option to buy it. Boss quests, including pet quests, show a picture of the boss, while collection quests show a scene from the quest. The purchase window for quest bundles also indicate the last day they are in stock. The quest title and text appear below the quest images. The quest describes a pest or problem that is plaguing Habitica, and the player is tasked with calming the troublemaking boss or gathering items to solve a problem. The quest's difficulty, ranked from 1 to 4, is provided. For example, a 1.5 difficulty rating looks like this:

Collection quests also show the number of items that must found to complete the quest.

To the right of the purchase window is a panel listing the rewards that will received upon completing the quest. All quests reward the player with experience. Other rewards may include gold, pet eggs, food, potions, equipment, or, for some quest lines, the next scroll in the series.

The left-hand toolbar offers search, filter, and hide functions, which can be used to limit the shop's display for easier browsing. To find a quest by name, use the search bar. Results will narrow as the search box is filled, showing quests with that exact combination of letters in the name. For example, type "ram" and the Market will show "Rooster Rampage", "The Thunder Ram", and "The Trampling Triceratops". Type "ramp" and you will be left with "Rooster Rampage" and "The Trampling Triceratops". To show the full Quest Shop again, clear the search bar.

To show or hide a particular quest type, use the filter. All boxes are checked by default. Uncheck a box to hide a quest type from view, and check it again to show it. The filter is useful if the player already knows which type of quest they want. If all filters are unchecked, nothing will be shown.

Below the filters are two toggle switches. The first allows the player to hide quests that they cannot buy because they are locked. The second hides quests they have already pinned to their Rewards Wishlist. 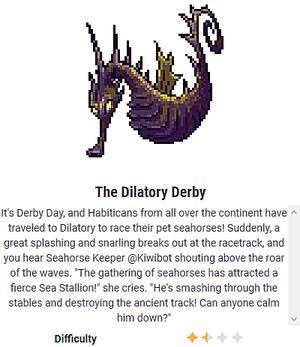 When the player clicks on a quest, the pop-up window gives quest details and the option to buy. At the bottom of the window, the player is asked how many quests they would like to buy, along with the per-unit price in gold or gems. By default, the purchase number is set to 1. The player can change this number with the up and down arrows next to the number. If the player needs to check if they have enough gold or gems to buy, the player's balance is displayed at the bottom of the window. To purchase, click "Buy Now".

For gem-purchasable quests, attempts to outspend your balance will cause the "Buy Now" button to become a "Purchase Gems" button. If the player does not have enough gold, the button will be a faded purple. When the transaction is complete, the quest is transferred to the player's Items Inventory. If the player decides not to buy a quest, they can either click the X in the top right corner of the window that displays the quest's details, click anywhere outside the window that displays the quest's details, or buy zero quests.