Begin a new character at Level 1 while retaining achievements, collectibles, and tasks with history.

An Orb of Rebirth resets the player's character back to level 1 without affecting many aspects of the player's account such as tasks, quests, achievements. It is similar to the "New Game+" option that appears in some video games. Note that the effects are instant and irreversible, so consider it wisely before rebirthing.

The Orb of Rebirth can only be accessed on the website. It is not yet available on the Mobile apps.

It becomes available in the Market when you have reached level 50.

The Orb costs 6 Gems until you reach level 100.

When you are at or above level 100, you can obtain the Orb for free. If you want to use it again for free, be aware that you not only have to be at least level 100 to be able to do that, there is also a 45 day waiting period until you can use the Orb again for free. During the 45-day waiting period, you can still use the Orb again but it will cost you 6 Gems; you will see an orange banner on the Orb's purchase screen informing you how many days are left in the countdown.

When a player clicks the Orb in the Market, they are given a chance to review what will happen before they confirm and spend their gems. If they confirm the decision, the following effects will take place:

Any item not listed above is not affected by the Orb (for example, Gems are not removed).

When a player first uses an Orb of Rebirth, they earn the achievement Began a New Adventure. The achievement comes with a badge on the player's avatar that shows the maximum level the player attained before rebirth if below 100, and otherwise states that the rebirth was at level "100 or higher."

Why use an Orb of Rebirth?[]

Rebirth is an option not to be taken lightly. Players shouldn't do it if they find resetting all that progress demotivating! However, here are some reasons players might consider purchasing it: 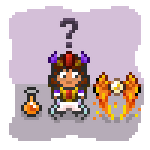 One of the best times to use the Orb of Rebirth is during a Grand Gala because it helps you access other classes' seasonal edition gear, for example by using this process:

Many users lend themselves gold by using Fix Character Values so that they are able to buy all the seasonal edition gear before the Gala is finished.

Changes to Orb of Rebirth[]

The Orb of Rebirth originally cost 8 gems and removed most of your previously purchased equipment from your inventory. Players who had used the Orb before this change was implemented may contact the Habitica team to ask to have their equipment restored. To do so, please go to Help > Report a Bug (on the website) or Support / About > Report a Bug (on the apps) and explain to the staff that you would like to have your old equipment restored.

Avatars used to display a plus sign (+) to signify that a player has been reborn at least once. That information now only appears on the player's Achievements screen.

See Start Over Options for a comparison of the different ways you can reset different parts of your account.