Habitica Wiki
Register
Don't have an account?
Sign In
Advertisement
in: Pets and Mounts, Incentives, Mechanics,
and 3 more
English

A mount is a pet that has grown into a mighty steed. The player can raise a pet into a mount by saddling or feeding it. Mounts, like pets, are purely aesthetic; they do not confer in-game bonuses of any sort. Mounts cause the player's avatar to be shown as riding them. They are available to the player as soon as drops are enabled after completing a second task.

A mount that has yet to be raised.
Converting your pet into a mount requires you do one of the following to an existing pet: 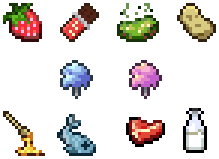 Upon completing a second task, food items become a random drop that you receive for completing tasks. There are a variety of foods that you can collect, such as colored cotton candy and meat. Food can also be purchased in the Market, where each food item, no matter its type, costs one gem. It can also be obtained through a special Reward called the Enchanted Armoire. Food items are awarded after certain numbers of check-ins. Finally, certain quests also award food as a reward for completion. The Food and Saddles category of your Item Inventory shows how many food items you own.

Head to the Pets section of your Stable to feed a pet. The collapsible Quick Inventory action drawer at the bottom of the page links to your food inventory. When you click on a food item, its box will be shaded purple and its icon will follow your pointer around the screen. If the icon moves over a pet that can be fed, a purple box will appear around that pet. Click within the box to feed it. Pets have different food preferences. You can experiment to find out the pattern or click "What does my pet like to eat?" in the Quick Inventory. This links to the Food Preferences wiki page. As you feed a pet, its green food bar will fill. When a pet is fed until it is fully grown it becomes a mount.

Instantly raises one of your pets into a mount.
A saddle can be used to instantly upgrade a player's pet into a mount. It can be purchased in the Market or received as a check-in prize. Saddles are used the same way as Food; first click on the saddle in the Quick Inventory and then click on the pet the player wishes to upgrade.

Saddles are the fastest way to turn a pet into a mount. Without them, the player must find or buy anywhere between 9 and 23 food items (depending on whether the pet is fed preferred food or other food). It would cost 9 Gems to purchase enough of a pet's preferred food item to raise it into a mount through feeding alone. A saddle will only cost 5 Gems and is therefore cheaper than buying food outright (Tip: Use a saddle only for pets you have not fed yet. Any food already fed to the pet is ignored.).

Effect on Your Stable[]

Once you have turned your pet into a mount, the mount appears in the Mounts section of the Stable and the pet appears greyed out in the Pets section, signaling it is not available. However, it still counts towards the Beast Master achievement.

If you raise a pet into a mount and then hatch the same pet again (using the same type of egg and potion), this second pet will not have a food bar beneath it, as it cannot become a mount.

Once your pet has been converted into a mount, it will move from the Pets section of the Stable page to the Mounts section. Click on the mount to make your avatar ride it. Click on it again to remove it from your avatar. A blue star appears next to the pet and mount currently equipped.

The Stable shows only the head of each mount but when your avatar rides a mount, you will see all of it, except for the portions that your avatar covers. (For a discussion about the appearance of mounts in the Mounts tab, see habitica Issue #3545 .)

Generation 1 (Gen 1) mounts can be obtained by feeding "Gen 1" pets, which are hatched by using a hatching potion on an egg.

There are two badges that may be awarded after players raise their Gen 1 pets into mounts. They are:

Mount Master: This is awarded to members who raise all 90 of the Gen 1 pets into mounts.

Triad Bingo: This is awarded to members who have hatched all 90 Gen 1 pets, raised those into mounts, and then hatched those pets a second time.

Both apply only to Gen 1 pets and mounts. Rare, quest, and magic potion pets do not count towards these badges.

Key to the Kennels (Release Mounts)[]

Main article: Key to the Kennels

Key to the Mount Kennels

Release all Standard (generation one) mounts

Master Key to the Kennels

Release all Standard (generation one) pets and mounts

Once you have collected all the Gen 1 pets and completed the Beast Master achievement, you will unlock the Key to the Kennels option.

Buying and using either the Key to the Mount Kennels or Master Key to the Kennels will release only your Gen 1 mounts: wolf, tiger, panda, lion, fox, flying pig, dragon, cactus, and bear. This will allow you to start over collecting and raising them again.

Magic potion mounts can be obtained by feeding magic potion pets, which are hatched using magic hatching potions on eggs. Most magic hatching potions are only available for a limited time, with the exception of the Royal Purple Hatching Potions, which were introduced as part of the Daily Check-In Incentives feature, and the quest-based Bronze, Silver, Amber, Ruby, Flourite, Wind-Up, Turquoise, Black Pearl, Mossy Stone, and Solar System potions. For more information on magic hatching potions, including availability and release dates, see the Hatching Potions page. Note that seasonal potions may not be available during the same time or event every year.

Quest mounts (also known as V2 mounts or Gen 2 mounts) are obtained by feeding quest pets, which are hatched using hatching potions on eggs given as rewards for completing specific quests. The food preferences of quest pets are identical to those of Generation 1 pets.

The rare mounts are the only mounts directly available without being raised from a pet.

These mounts are part of an Event Item Sequence.

Matt the Beast Master is the character shown on the Pets and Mounts tabs and is the caretaker of all your pets and mounts.