Monstrous Mandrill and the Mischief Monkeys is a quest with a boss called the Monstrous Mandrill. Defeating this boss will unlock the Monkey Quest Pet. The quest scroll can be purchased from the Quest Shop for 4 gems.

The Monstrous Mandrill's HP (400) makes this a short quest and its strength multiplier (1.5) make this an easy quest. Without using Warrior or Mage boss damaging skills, a four-person party can typically finish this quest in less than two weeks. This quest is recommended for lower level (less than level 25) characters and smaller parties.

The Sloensteadi Savannah is being torn apart by the Monstrous Mandrill and his Mischief Monkeys! They shriek loudly enough to drown out the sound of approaching deadlines, encouraging everyone to avoid their duties and keep monkeying around. Alas, plenty of people ape this bad behavior. If no one stops these primates, soon everyone's tasks will be as red as the Monstrous Mandrill's face!

"It will take a dedicated adventurer to resist them," says @yamato.

"Quick, let's get this monkey off everyone's backs!" @Oneironaut yells, and you charge into battle.

You did it! No bananas for those fiends today. Overwhelmed by your diligence, the monkeys flee in panic. "Look," says @Misceo. "They left a few eggs behind." @Leephon grins. "Maybe a well-trained pet monkey can help you as much as the wild ones hinder you!"

The eggs obtained from this quest can be used to raise the Monkey pets and mounts.

Artwork featuring the Monstrous Mandrill was created for the official Habitica blog. 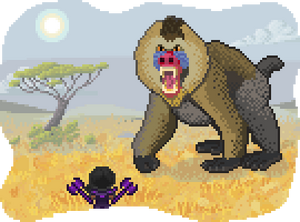 For those with phobias who don't want to see certain quest pets, mounts, and bosses (such as the monkeys from this quest) during gameplay, there is a Phobia Protection Extension.

Retrieved from "https://habitica.fandom.com/wiki/Monstrous_Mandrill_and_the_Mischief_Monkeys?oldid=157954"
Community content is available under CC-BY-SA unless otherwise noted.