Kangaroo Catastrophe is a quest with a boss called the Catastrophic Kangaroo. Defeating this boss will unlock the Kangaroo Quest Pet. The quest scroll can be purchased from the Quest Shop for 4 gems.

The Catastrophic Kangaroo's HP (700) makes this a medium length quest and its strength multiplier (2) make this a medium difficulty quest. Without using Warrior or Mage boss damaging skills, a four-person party can typically finish this quest in between two and three weeks.

Maybe you should have finished that last task… you know, the one you keep avoiding, even though it always comes back around? But @Mewrose and @LilithofAlfheim invited you and @stefalupagus to see a rare kangaroo troop hopping through the Sloensteadi Savannah; how could you say no?! As the troop comes into view, something hits you on the back of the head with a mighty whack!

Shaking the stars from your vision, you pick up the responsible object -- a dark red boomerang, with the very task you continually push back etched into its surface. A quick glance around confirms the rest of your party met a similar fate. One larger kangaroo looks at you with a smug grin, like she’s daring you to face her and that dreaded task once and for all!

“NOW!” You signal your party to throw the boomerangs back at the kangaroo. The beast hops further away with each hit until she flees, leaving nothing more than a dark red cloud of dust, a few eggs, and some gold coins.

@Mewrose walks forward to where the kangaroo once stood. “Hey, where did the boomerangs go?”

“They probably dissolved into dust, making that dark red cloud, when we finished our respective tasks,” @stefalupagus speculates.

@LilithofAlfheim squints at the horizon. “Is that another kangaroo troop heading our way?”

You all break into a run back to Habit City. Better to face your difficult tasks than take another lump to the back of the head!

The eggs obtained from this quest can be used to raise the Kangaroo pets and mounts.

Artwork featuring the Catastrophic Kangaroo was created for the official Habitica blog. 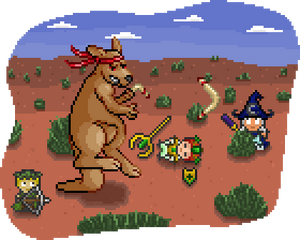 Retrieved from "https://habitica.fandom.com/wiki/Kangaroo_Catastrophe?oldid=163565"
Community content is available under CC-BY-SA unless otherwise noted.