Jacko of the Lantern

Jacko of the Lantern

Jacko of the Lantern is the third and final part of the Terror in the Taskwoods equipment quest line and introduces the boss known as Jacko of the Lantern. The quest can be purchased from the Quest Shop for 400 gold once the previous quest in the chain, Finding the Flourishing Fairies, has been completed.

Jacko of the Lantern's HP (1000) makes this a long quest and its strength multiplier (2) makes this a medium difficulty quest. Without using Warrior or Mage boss damaging skills, a four-person party can typically finish this quest in between three and four weeks.

Ready for battle, your group marches to the heart of the forest, where the renegade spirit is trying to destroy an ancient apple tree surrounded by fruitful berry bushes. His pumpkin-like head radiates a terrible light wherever it turns, and in his left hand he holds a long rod, with a lantern hanging from its tip. Instead of fire or flame, however, the lantern contains a dark crystal that chills you to the very bone.

The Joyful Reaper raises a bony hand to her mouth. "That's -- that's Jacko, the Lantern Spirit! But he's a helpful harvest ghost who guides our farmers. What could possibly drive the dear soul to act this way?"

"I don't know," says @bridgetteempress. "But it looks like that 'dear soul' is about to attack us!"

Defeat Jacko of the Lantern.

After a long battle, you manage to land a well-aimed blow at the lantern that Jacko carries, and the crystal within shatters. Jacko suddenly snaps back to his senses and bursts into glowing tears. "Oh, my beautiful forest! What have I done?!" he wails. His tears extinguish the remaining fires, and the apple tree and wild berries are saved.

After you help him relax, he explains, "I met this charming lady named Tzina, and she gave me this glowing crystal as a gift. At her urging, I put it in my lantern... but that's the last thing I recall." He turns to you with a golden smile. "Perhaps you should take it for safekeeping while I help the wild orchards to regrow."

Artwork featuring Jacko of the Lantern was created for the official blog and social media. 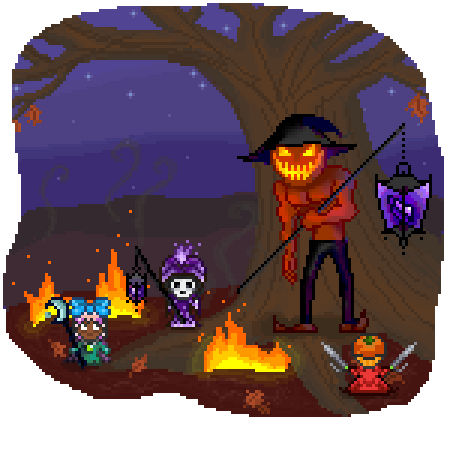