Icicle Drake Quake is the third and final part of the Stoikalm Calamity equipment quest line and introduces the boss known as the Icicle Drake Queen. The quest can be purchased from the Quest Shop for 400 gold once the previous quest in the line, Seek the Icicle Caverns, has been completed.

Icicle Drake Queen's HP (1000) makes this a long quest and its strength multiplier (2) makes this a medium difficulty quest. Without using Warrior or Mage boss damaging skills, a four-person party can typically finish this quest in between three and four weeks.

The twining tunnels of the icicle drake caverns shimmer with frost... and with untold riches. You gape, but Lady Glaciate strides past without a glance. "Excessively flashy," she says. "Obtained admirably, though, from respectable mercenary work and prudent banking investments. Look further." Squinting, you spot a towering pile of stolen items hidden in the shadows.

A sibilant voice hisses as you approach. "My delicious hoard! You shall not steal it back from me!" A sinuous body slides from the heap: the Icicle Drake Queen herself! You have just enough time to note the strange bracelets glittering on her wrists and the wildness glinting in her eyes before she lets out a howl that shakes the earth around you.

You subdue the Icicle Drake Queen, giving Lady Glaciate time to shatter the glowing bracelets. The Queen stiffens in apparent mortification, then quickly covers it with a haughty pose. "Feel free to remove these extraneous items," she says. "I'm afraid they simply don't fit our decor."

"Also, you stole them," @Beffymaroo says. "By summoning monsters from the earth."

The Icicle Drake Queen looks miffed. "Take it up with that wretched bracelet saleswoman," she says. "It's Tzina you want. I was essentially unaffiliated."

Lady Glaciate claps you on the arm. "You did well today," she says, handing you a spear and a horn from the pile. "Be proud."

Artwork featuring the Icicle Drake Queen was created for the official blog and social media. 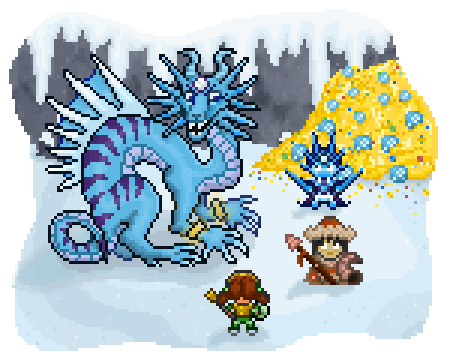 Retrieved from "https://habitica.fandom.com/wiki/Icicle_Drake_Quake?oldid=164546"
Community content is available under CC-BY-SA unless otherwise noted.