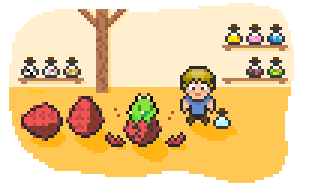 Players can use Hatching Potions to hatch pets by combining potions with eggs. The egg determines the type of pet that will hatch, and the potion determines its color or other physical attributes (e.g., skeleton or zombie). Any pet (except for rare pets) can be hatched with any standard potion.

All standard potions are available as drops that players receive randomly for completing Habits, Dailies, and To Do's once they have completed their second task. Players can also purchase hatching potions in the Market for gems, or sell them for gold. Some quests also offer hatching potions as rewards. The potions range in value from Base, which hatches a normal pet and sells for 2 gold points, to Golden, which hatches a cheerful golden-colored pet and sells for 5 gold points.

Magic Hatching Potions give additional color options to the nine standard pets and mounts. Most have the same shape as the base image, though some have minor modifications like decorative wings on the Fairy pets and mounts, forehead hearts on the Cupid ones, or sand piles instead of legs on the Sand Sculpture ones. The exception to this rule is Wacky potions, which are a set of magic hatching potions generated from April Fool's pranks and which drastically change both shape and color of pets. (Wacky potions do not have mount versions.) Unless otherwise noted, once unlocked all magic hatching potions can be bought for two

, and sold for two

When a potion drops, the type of potion is determined randomly. Different types have different drop probabilities:

Note that due to the random nature of drops, individual users may receive certain potions at higher or lower rates than those quoted above.

Under the Inventory tab, you will see the potions you currently own. Click on a potion to use it. Once clicked, any eggs that you can hatch with that potion will be highlighted in purple. Click on a highlighted egg to use the potion; this will bring up a prompt confirming that you would like to hatch the egg using said potion.

If an egg is not highlighted, that means that you already have a pet of that type that was hatched with the potion you have selected. (For example, if you already have a red wolf, clicking on a red hatching potion will not highlight any wolf eggs in your inventory.) Should you attempt to use the potion to hatch an unhighlighted egg anyway, you will receive an error, and will not lose the egg or potion. However, once you have upgraded a pet to a mount, you may hatch a second pet of that type to replace it, enabling you to have a pet and mount of the same species and color at once.

Players can also sell excess potions. Detailed instructions for how to do so in a browser or the mobile app are available here.

Magic Hatching Potions are any potions beyond the 10 basic colors. They can only be used on standard "Generation 1" eggs (i.e., non-quest eggs), and the resulting pets enjoy all types of food. Once unlocked most can be bought in the market for two

, and sold for two

. If you try to buy more than you can use, the game will warn you about that, and ask if you're sure.

There are three basic types of magic hatching potions (Daily Check-In Incentives, Seasonal Edition, and Quest-Locked), plus some sub-types, based on the requirements for unlocking and acquiring them. Please note that all the details below are true as of the time this article was written, but have varied in the past and may change in the future.

Note: One of the sub-types of magic hatching potions, "Wacky", has both the "Seasonal" and "Quest-Locked" types. Although their quests are only available seasonally, once unlocked the potions can be purchased year-round.

(The "Gap" category is called that because it is the only category broken over two non-consecutive months, so it seems like the potions in this category are filling in gaps until something more regular is developed/established.)

This is the complete history of all Magic Hatching Potion releases. Most potions that have quests do not also have availability end dates, but for those that do: your ability to buy potions after completing the quest one time stays even if the quest itself becomes unavailable.