A player needs to be level 40 or above to initiate the quest. Lower level party members are still able to participate in the quest.

The Golden Knight's HP (1000) makes this a long quest and its strength multiplier (3) makes this a very difficult quest. Without using Warrior or Mage boss damaging skills, a four-person party can typically finish this quest in between three and four weeks. The very high difficulty means missed Dailies will cause higher amounts of damage to the group; having a Healer in the party is highly recommended.

Armed with dozens of Habiticans' testimonies, you finally confront the Golden Knight. You begin to recite the Habitcans' complaints to her, one by one. "And @Pfeffernusse says that your constant bragging-" The knight raises her hand to silence you and scoffs, "Please, these people are merely jealous of my success. Instead of complaining, they should simply work as hard as I! Perhaps I shall show you the power you can attain through diligence such as mine!" She raises her morningstar and prepares to attack you!

The Golden Knight lowers her Morningstar in consternation. “I apologize for my rash outburst,” she says. “The truth is, it’s painful to think that I’ve been inadvertently hurting others, and it made me lash out in defense… but perhaps I can still apologize?”

Artwork featuring the Golden Knight was created for the official blog and social media. 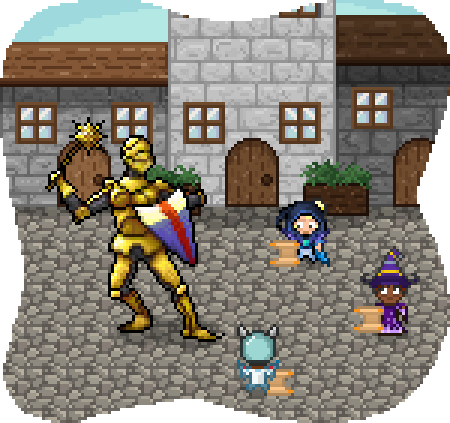