Find the Cub was the second quest in Habitica and also the first available collection quest. It was released as part of the Winter Wonderland 2013-2014 event. This scroll was originally available in the Market for 4 gems until January 31, 2014.

This quest is the second part of the only two part quest line following Trapper Santa (though it is not dropped on completion of Trapper Santa). You can purchase the scroll and use it even if you haven't finished Trapper Santa.

This scroll is only available in the Seasonal Shop during the Winter Wonderland event. Once purchased, there is no time limit to use the scroll.

When Trapper Santa captured the polar bear mount, her cub ran off into the icefields. You hear twig-snaps and snow crunch through the crystalline sound of the forest. Paw prints! You start racing to follow the trail. Find all the prints and broken twigs, and retrieve the cub!

Show/hide spoilers
You've found the cub! It will keep you company forever.

Artwork featuring the Polar Bear Cub was created for the official blog and social media. 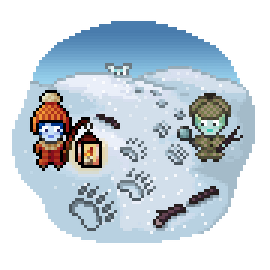