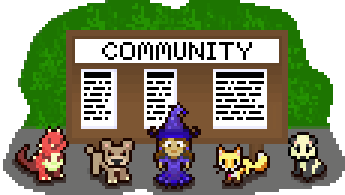 Habitica has always had strong roots in its community. In addition to participating in the social aspects of the website, the community continues to be involved in the growth and evolution of Habitica in various ways.

Early in 2013, Tyler Renelle started a Kickstarter to enable full-time development on some core features of HabitRPG (now known as Habitica).

The initial goal for funding was set to $25,000 USD. This was exceeded and, by the time the funding period had ended, a total of $41,191 USD had been pledged by 2,817 people. Thus, the community has played a key role in Habitica's development since its early stages.

In August and September 2019, Habitica Staff started a second Kickstarter to test interest for and fund development of a Habitica pin line. That Kickstarter reached its $2,000 goal in the first two hours and ultimately raised $61,597 in total pledges from 1,154 backers.

The Habitica staff and moderators have worked diligently to create a set of guidelines to help keep Habitica safe and fun for members of all ages. The Community Guidelines are friendly and easy-to-read.

Special Events in Habitica for seasons and holidays common in the USA have been celebrated beginning in 2013. As part of these special events, there are four seasonal Grand Galas every year: Winter Wonderland, Spring Fling, Summer Splash, and Fall Festival . These fun-filled events have involved a temporary change in costume for the NPCs, special items for players, introduction of new quests, limited edition seasonal gear, and other surprises. Sometimes, there will be a world boss fight to participate in.

The first special event, 2013 Trick or Treat, evolved into the Fall Festival Grand Gala. During Fall Festivals, special clothing is released and NPCs dress up to celebrate. Food drops become candy drops for the festival and all users who log on during the event receive a rare jack-o-lantern pet.

Habitica releases numerous game features and items including new quests, a set of gear for each class, and snowball fun.

On 31 January each year, Habitica celebrates its birthday with party costumes, a special achievement, and limited edition food items.

To celebrate Valentine's Day, players can send a Valentine Card to their party members and earn the Adoring Friends achievement.

On Valentine's Day 2017 (February 14), two of the NPCs, Bailey the Town Crier and Daniel the Tavern Keeper, dressed up and decorated in celebration of the occasion.

On Valentine's Day 2019 (February 14), and beginning on February 11, 2020, some of the NPCs, Bailey the Town Crier, Daniel the Tavern Keeper, and Alexander the Merchant, dressed up and decorated in celebration of the occasion.

Habitica celebrates Spring Fling, during which new sets of gear for each class and new quests are introduced, and new avatar customization options are added. In addition, the NPCs gain flowers around their art.

For summer, special clothing and backgrounds are released and the NPCs dress up to celebrate.