Bosses are powerful enemies that can be battled via the quest system. All party members who are participating in the quest fight the boss together. Players reduce the boss's health by completing their Dailies, positive Habits, and To Do's, and take damage for both their own and other party members' missed Dailies.

Boss fights make the game more difficult by multiplying damage from Dailies. They can increase players' motivation because their bad habits will now harm their friends as well as themselves. Even players who are resting in the Inn will take damage for their party members' missed Dailies.

When a boss is defeated, the players earn rewards, which consist of gold, items or experience.

Failure to complete Dailies results in the boss attacking all of the players for damage. If a World Boss is active, it does not do a second set of damage to you, but fills its rage bar instead.

If a quest boss has a rage effect, missing Dailies also fills the boss's rage bar as well as doing damage to you and the party. If the rage bar fills completely, the boss will activate an effect. For most bosses, the rage effect is to heal the boss, but some bosses have other rage effects. Bosses with this feature are designed to be more of a challenge to parties to complete their tasks regularly!

Taking damage from negative Habits does not cause the boss to do additional damage to you or your party.

Damage to the boss and the player is dealt on each player's Cron.

Health Points (HP) represent the health of a Boss and indicate how well the battle against them is going. They show how much damage has already been done to the Boss, and how much more needs to be done until a party has defeated the Boss.

It is shown through a red bar underneath the Boss's picture, known as a Health Bar, and it includes a numerical display of the current HP out of the maximum HP (e.g. 227.84/300.00). 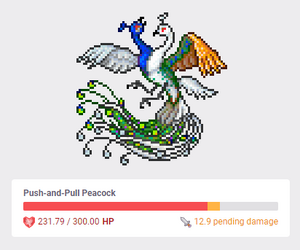 A Boss's Health is usually a good indicator of how long a quest is going to take and how difficult it will be. The more Health a Boss has, the longer it will take a party to defeat it. For example; a party of four that does not have a Mage or Warrior and deals an average of 10 damage per player, will take 30 days to defeat a Boss with 1200 HP but only 10 days to defeat a Boss with 400 HP. See the table further down this page for an overview of all the Quests Bosses and their Health.

If you are currently participating in a quest with a boss, you can see an estimate of how much damage you'll do to the boss at your next Cron. The damage estimate can be seen in the quest details under the Health Bar of the Boss, on the right side (e.g. 13.1 pending damage, as in the image above).

You can also view pending damage via the Quest Progress link on the Data Display Tool. Alternatively, every time you complete a task on the website, you can see how much damage it will cause, as a notification.

Damage to a quest boss from Habits, Dailies, and To Do's is delivered at the player's next Cron and is calculated as follows:

Task difficulty does not affect damage done to a boss. A Trivial task will deal equally as much damage as a Hard task if they both have the same task value.

When one player fails to complete Dailies, the boss attacks all of the players. Boss damage is determined by the following formula:

Where "Dmg" means the amount of damage the player would normally take for the missed Dailies before Constitution is applied. Boss damage is applied to all party members participating in the quest, including the person whose missed Dailies generated the damage. This means that, while on a boss quest, players take damage from their own missed Dailies twice.

Boss strength is a fixed multiplier specific to that boss - it does not depend on the boss's health or any other factor.

Constitution does not reduce boss damage. This is so that all players are equally affected by the boss. If that were not the case, then a player with a high Constitution could leave their Dailies undone and take only a small amount of damage from the boss, while causing large damage to their party members.

A world boss is the boss in a special type of quest where all users of Habitica are involved. All users are rewarded upon its completion. Damage is done to a world boss in the same way as to a normal quest boss: by completing Habits, Dailies, and To Do's, and by casting Burst of Flames or Brutal Smash. The previous world bosses were The Dread Drag'on of Dilatory, The Abominable Stressbeast of the Stoïkalm Steppes, Burnout and the Exhaust Spirits, The Be-Wilder, and The Dysheartener.