"Operant conditioning" is a type of learning developed by B. F. Skinner and other behavioral psychologists. Operant conditioning is a psychological term that describes how people learn from the consequences of their actions. If you do something and something good happens as a result, then you are more likely to repeat that behavior. On the other hand, if you do something and something bad happens, you are much less likely to engage in that kind of behavior. 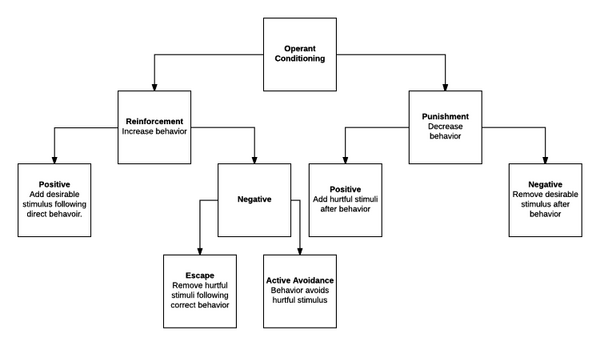 A reinforcer is any consequence of a behavior that encourages the behavior to recur.

A punishment is any consequence of a behavior that discourages that behavior from recurring.

Behavioral scientists theorize that all behaviors occur for a reason and that behavior reoccurs because it is being reinforced. If a behavior is no longer being reinforced, or if a replacement behavior can be introduced to eliminate the first behavior, that first behavior can be dramatically decreased. When a behavior is reduced to the point where it no longer reoccurs, the behavior is considered to be extinguished, or made extinct. A player can continue to reward the replacement behavior or the absence of the original behavior but, in time, the reinforcement is not required as stringently as before. On Habitica, it is up to the player to decide when a Daily or Habit is changed or removed, but it should be noted that if the reinforcement of that behavior stops, the change becomes harder to maintain.

Trying to immediately end the occurrence of behavior is like quitting smoking cold turkey. It's not impossible to change behavior this way, but behavioral scientists note that longer-lasting change occurs through making small changes that lead to a behavior. The process of making those small changes is shaping.

The first step in shaping is identifying the targeted behavior. A player may want to meditate, take up a new language, or introduce new foods to their diet. These targeted behaviors do not currently occur. That is, if they could be motivated to occur, they most likely would be part of a player's life already.

The targeted behaviors need to be reinforced before they become part of the player's daily life, but it's very difficult to introduce a new behavior and automatically expect to it reoccur as if it were always part of a player's existence. Shaping is a way of reinforcing all of the steps towards reaching that behavioral goal.