Joy and Doom to All!

THE SPRING FLING HAS FLUNG TOO FAR! Run while you can, Habiticans! The floral theme has come to life and is taking over Habitica with horrifying cheer, repeat, the flowers are taking over HMMMPH MMPH MMMHPPPH....

Players, based on their classes, became different kinds of flower:

Players returned to their normal avatars after Cron, but Shiny Seeds were made available from April 2 to April 30, allowing players to turn their party members into flowers once more.

Some Elite and Legendary Heroes (Contributors) had changes to their titles and contributions in the Hall of Heroes. Daniel the Bard, Alys, and Lefnire, for example, became "Daisy Bard," "Sweet Alyssum," and "Burritoplant," respectively, with Lefnire's contribution becoming "Main contribution = Burritoplant."

NPCs throughout Habitica were attacked by flowers: 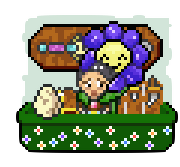 An official challenge appeared in the Tavern, entitled "SUBMIT TO YOUR FLOWERY OVERLORDS :D" and created by Lemoness/NOT A FLOWER.