The Thunder Ram is a quest with an eponymous boss. Defeating this boss will unlock the Sheep Quest Pet. The quest scroll can be purchased from the Market for 4 gems.

This quest is an easy difficulty boss; the Thunder Ram's HP pool (300) and Strength multiplier (1.5) are in the lower tier of the quest bosses. Without using Warrior or Mage boss damaging skills, a four-person party can typically finish this quest in about a week.

As you wander the rural Taskan countryside with friends, taking a "quick break" from your obligations, you find a cozy yarn shop. You are so absorbed in your procrastination that you hardly notice the ominous clouds creep over the horizon. "I've got a ba-a-a-ad feeling about this weather," mutters @Misceo, and you look up. The stormy clouds are swirling together, and they look a lot like a... "We don't have time for cloud-gazing!" @starsystemic shouts. "It's attacking!" The Thunder Ram hurtles forward, slinging bolts of lightning right at you!

Impressed by your diligence, the Thunder Ram is drained of its fury. It launches three huge hailstones in your direction, and then fades away with a low rumble. Upon closer inspection, you discover that the hailstones are actually three fluffy eggs. You gather them up, and then stroll home under a blue sky.

The eggs obtained from this quest can be used to raise the Sheep pets, which can additionally be fed to be raised into mounts.

Artwork featuring the Thunder Ram was created for the HabitRPG blog. 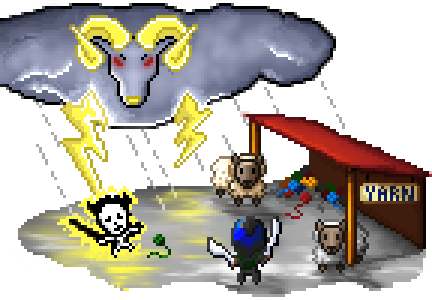