Escape the Cave Creature is a quest with a boss known as the Crystal Colossus. Defeating this boss will unlock the Rock Quest Pet. The quest scroll can be purchased from the Market for 4 gems.

This quest is an easy difficulty boss; the Crystal Colossus's HP pool (400) and Strength multiplier (1.5) are in the lower tier of the quest bosses. Without using Warrior or Mage boss damaging skills, a four-person party can typically finish this quest in under two weeks.

Crossing Habitica's Meandering Mountains with some friends, you make camp one night in a beautiful cave laced with shining minerals. But when you wake up the next morning, the entrance has disappeared, and the floor of the cave is shifting underneath you.

"These aren't crystals - these are teeth!" @Painter de Cluster grabs your hand.

"We'll have to find another way out – stay with me and don't get distracted, or we could be trapped in here forever!"

Your diligence has allowed you to find a safe path through the living mountain. Standing in the sunshine, your friend @intune notices something glinting on the ground by the cave’s exit. You stoop to pick it up, and see that it’s a small rock with a vein of gold running through it. Beside it are a number of other rocks with rather peculiar shapes. They almost look like… eggs?"

The eggs obtained from this quest can be used to raise the Rock pets, which can additionally be fed to be raised into mounts. 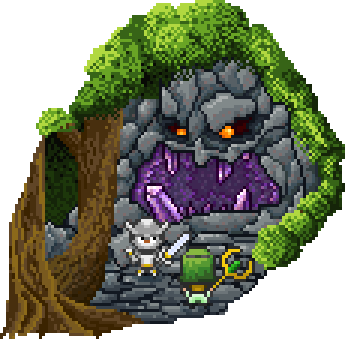